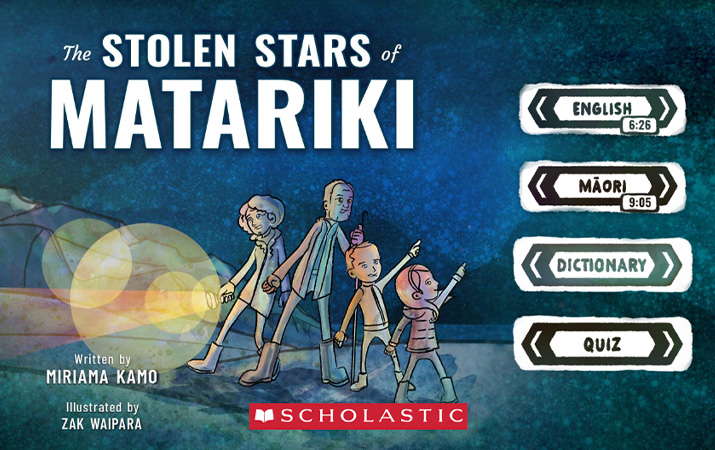 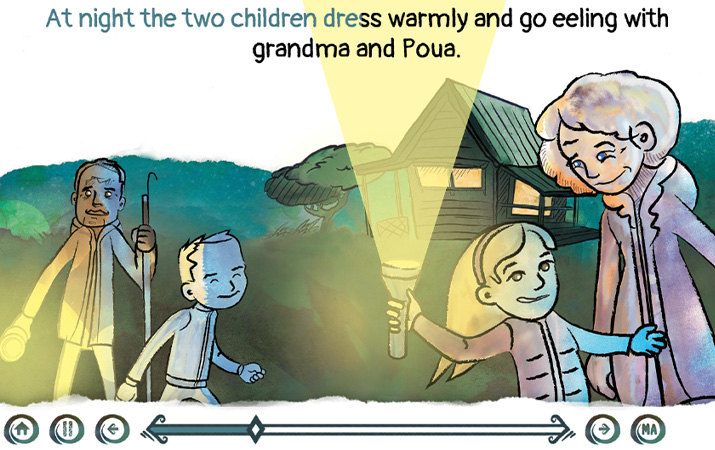 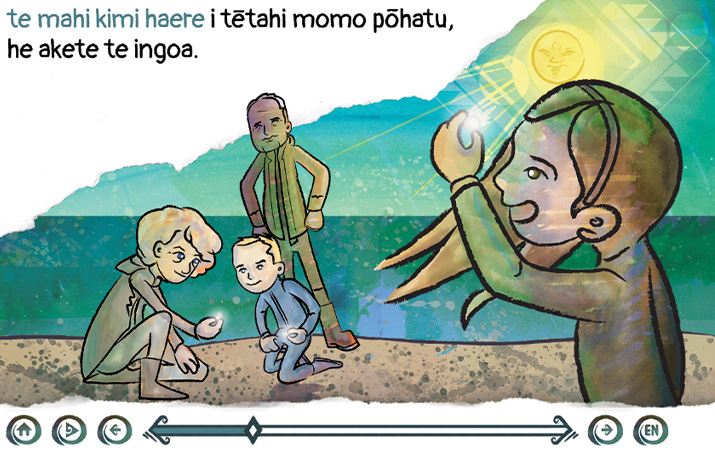 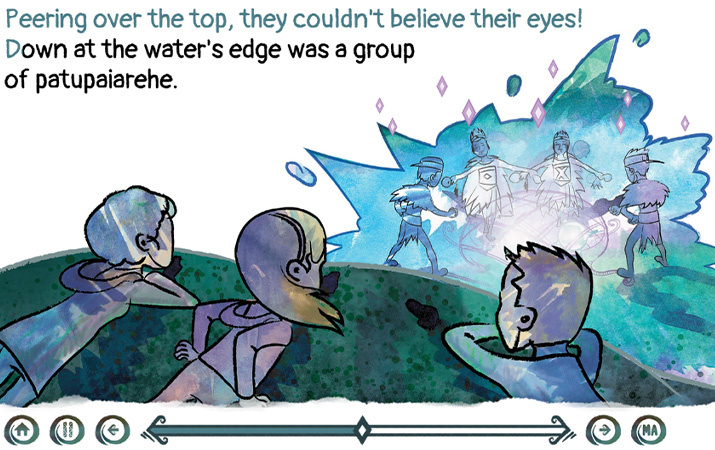 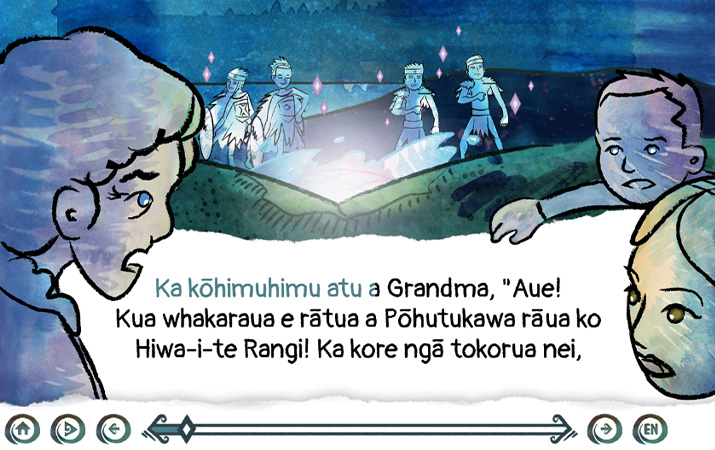 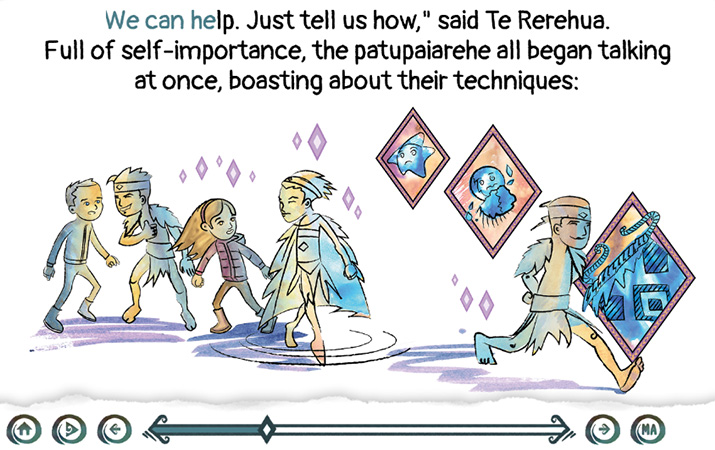 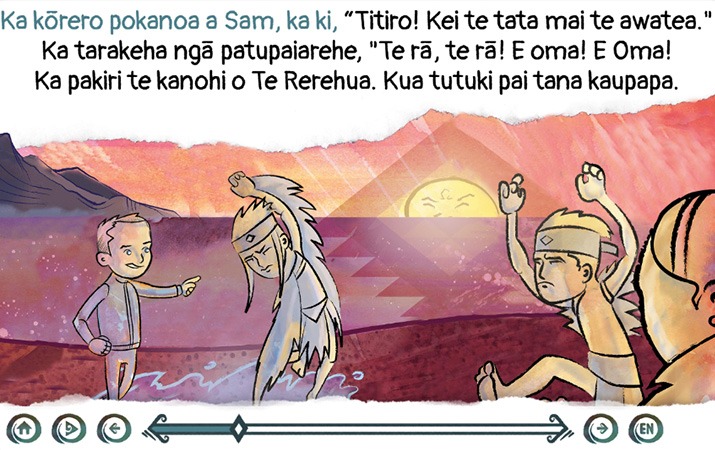 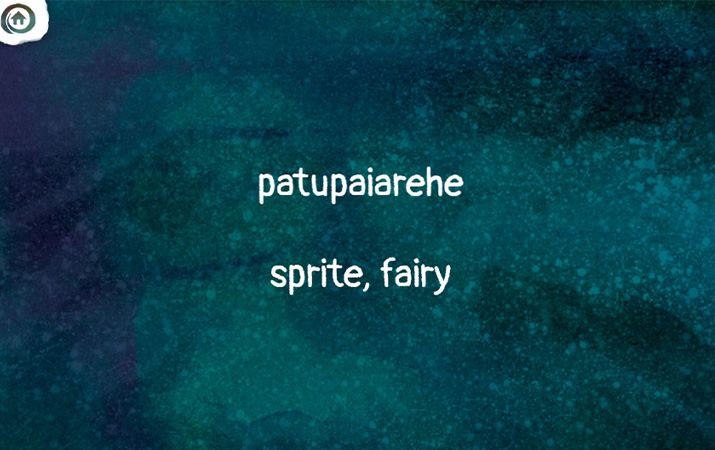 Synopsis: Sam and Te Rerehua, visiting Grandma and Pōua at Te Mata Hāpuku (Birdling’s Flat). While collecting agate and fishing for eels from the beach they look up at the stars and their grandmother tells them stories. One night Grandma notices two Matariki stars are missing from the sky. They then discover some naughty patupaiarehe playing on the beach with two glowing rocks. It’s up to Sam and Te Rerehua to save the stars. The two fair-headed children blend in with the patupaiarehe on the beach and ask what is happening.

The patupaiarehe spend so much time skiting about what they’re going to do with the two stolen stars they don’t notice it’s nearly sunrise. When Te Rerehua tells them the sun is coming up, the patupaiarehe run from the beach, fearing their delicate white skins will burn.Pōua launches the two Matariki stars back up into the sky with his eeling gaff, and the nine stars of Matariki are back together again. The grandparents and children then carry their freshly caught eels home.

About the Book’s Creators:
Miriama Kamo is an award-winning journalist. She is the anchor of TVNZ’s flagship current affairs programme Sunday and Māori current affairs programme Marae. Miriama has worked on many of TVNZ’s key programmes including 1 News at 6 as a newsreader. She is also a keen writer who is published in Metro, NZ Herald and The Spinoff and is currently trying her hand at writing a screenplay. Miriama and husband Mike are proud parents of Sam and Te Rerehua. This is her first book with Scholastic NZ.

Zak Waipara is a former NZ Herald graphic artist and HOD of Animation at Animation College. Zak (Rongowhakaata, Ngati Porou, Ngati Ruapani, Ngati Kahungunu) is now Digital Media lecturer at AUT. He has worked as a designer for Māori Television’s children’s show Miharo, illustrated comics and a range of books, and created animated music videos. He is the illustrator of Horeta and the Waka (Scholastic NZ). Born in Milton, in the South Island, Zak now lives in Auckland.